An April Fool’s story that’s actually true: back during the 1978 newspaper strike in New York City, a group of writers and editors that included some now-illustrious names — George Plimpton, Nora Ephron, Carl Bernstein, Terry Southern, Frances FitzGerald — put together a parody newspaper and got it onto newsstands. Here’s the first-ever oral history of this proto-Onion from some of the folks involved. – The New York Times 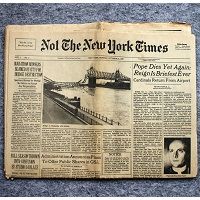