“During his time at Houston Ballet as choreographic apprentice in 1989, and later as choreographic associate from 1995 to 2008, he created seven ballets … Although the company has returned to his popular full-length Peter Pan several times over the years, and In Dreams in the 2017/18 season, [Pretty Things] is McIntyre’s first new work for the company in nearly two decades.” – Dance Magazine 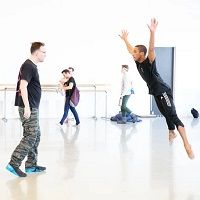