Insulted and incensed, Oedipus responds as intemperately as Trump when crossed by a politician or held to account by a member of the press. To salve his injured pride, Oedipus harks back to the equivalent of his electoral coup. It was through the sharpness of his wit that he, an outsider not in the royal line of succession, solved the riddle of the Sphinx and won the throne. – Los Angeles Times 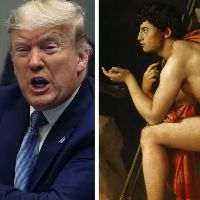