Moira Macdonald was at Pacific Northwest Ballet’s final (in too many senses) dress rehearsal for a program the public won’t get to attend. “There was no one in the seat in front of me, no one next to me, no one across the aisle — just performance, filling up the empty spaces. You don’t usually think of McCaw Hall as a room, but it is; this was like a large version of a living-room entertainment. Were those people onstage, dancing with the fierce passion that comes when you only get one shot at something, performing only for me? It was easy to think so.” – The Seattle Times 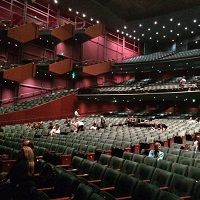