“The classic story of Atticus Finch, a small-town lawyer who defends a black man in a racist town, was told under the championship flags of the New York Knicks (who have played their own tragedy there for years) and the Rangers. And with a new venue and a younger audience came new standards of theater decorum: The middle and high school students groaned when things went badly for the protagonists and cheered shamelessly at insults lobbed at the town’s most virulent racists.” – The New York Times 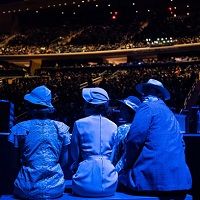