“In his autobiography, Taylor said he had asked Balanchine if there was any way it should be performed. His reply: ‘Is like fly in glass of milk, yes?'” City Ballet soloist Jovani Furlan learned the dance, titled Variations, from Paul Frame (who learned it from Taylor); Furlan has now taught it to, and is alternating performances with, Michael Trusnovec, long the star dancer in Taylor’s own company. Gia Kourlas interviews them both. – The New York Times 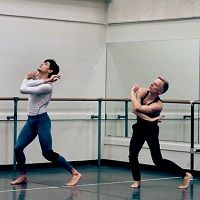