The web favors certain virtues—wit, weirdness, bombast, and urgency—over others. In real time, we’ve witnessed critics watch their well-crafted essays sink to the internet’s depths like a stone. As our cameras rolled, a critic at one of the nation’s largest newspapers darted from one editor’s desk to another, trying to understand why a blog post was bombing and, eventually, with a moving show of emotion, broke down. – ARTnews 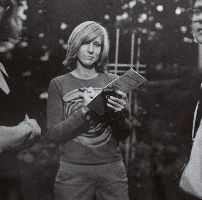