“Though her work has evolved beyond the minimalist choreography that first garnered her critical notice in the 1980s, [Anne Teresa] De Keersmaeker remains a formalist. Throughout this production, she makes ingenious use of traveling wedge formations, each gang shaped loosely into a triangle with their leader at the point, as they circle, stalk, intimidate, and prepare to pounce. [Director Ivo] van Hove says that De Keersmaeker’s facility in moving groups of bodies around a stage is partly why he chose her to choreograph this musical, as it is one in which ‘groups are really important.'” – American Theatre 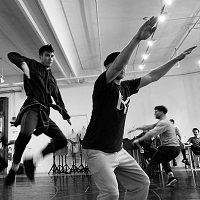