If the SAG Awards are any guide – and they can be – Parasite may win best picture; it won best ensemble at the ceremony on Sunday night. “When the Parasite cast, none of whom received individual nominations, earned a warm standing ovation early in the night from the audience of actors at the Shrine Auditorium, while introducing the film, it was clear where the crowd’s affections resided.” – Los Angeles Times 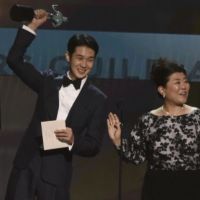