The letter, addressed to Art Basel global director Marc Spiegler and Adeline Ooi, its director Asia, did not mince words when airing complaints about the state of the fair amid the Hong Kong protests, which have been going on for months. It claims that “many people who normally attend the fair have indicated that they will not attend this year” and that “many of our artists are unwilling to have their work shown at the fair” because participation in a territory under threat of increased Chinese control is not “consistent with their core belief in the freedom of expression.” – Artnet 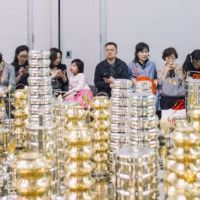