“A usually cheery online community of quilters has been ripped apart by a sewing challenge depicting a No. 2 pencil erasing the ‘in’ from the word injustice. Some members of the National Quilt Museum’s Block of the Month Club, which gives out quilting patterns from an array of artists, objected to the January block, claiming it introduced politics into the 13,400-person group. The design was created by the Social Justice Sewing Academy, a California nonprofit loosely tied to Black Lives Matter.” – The Washington Post 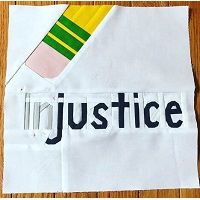