“After huge success with Python in the 1970s and early ’80s, including [directing and acting in] the feature films Monty Python and the Holy Grail, Life of Brian and The Meaning of Life, Jones went on to work on a huge variety of projects. With [Michael] Palin, he created the successful TV series Ripping Yarns and forged a post-Python directorial career with Personal Services, Erik the Viking and The Wind in the Willows. He made a series of TV documentaries (specialising in medieval history), wrote nearly 20 children’s books, and contributed a string of comment pieces for the Guardian and Observer denouncing the ‘war on terror’.” – The Guardian 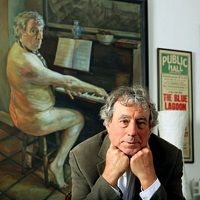