Larkin won four Tonys for his work as a designer on Broadway. “Larkin won his Tonys in a remarkable run in the mid-1950s, for Ondine, The Teahouse of the August Moon, No Time for Sergeants and Inherit the Wind. The last three of those plays were running simultaneously on Broadway. Mr. Larkin was still in his 20s.” He also designed movies like Tootsie and Miss Congeniality, and was the co-designer of the George Clinton band’s famous Mothership. – The New York Times 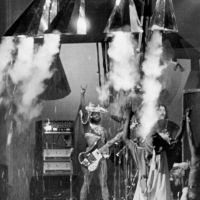