“While best known for his anchor work [as co-founder of what is now The PBS NewsHour], which he shared for two decades with his colleague Robert MacNeil, Mr. Lehrer moderated a dozen presidential debates and was the author of more than a score of novels, which often drew on his reporting experiences. He also wrote four plays and three memoirs.” – The New York Times 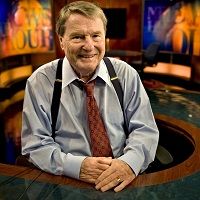