Dancers and musicians have been striking alongside public sector workers to oppose the government’s plan to scrap more than 40 separate pension schemes and replace them with a single points-based system. More than 70 shows have been cancelled since December at a loss of nearly 15 million euros ($16.5 million) — greater than the state’s annual contribution to the Opera pension fund. – France24 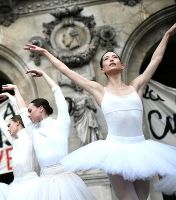