“Eric Wirth, vice president of the Guild of French Architects, … forcefully argued that wood — rather than concrete, material, or other materials that have been suggested — was the most ecological and structurally sound material during at a hearing at the National Assembly this week. …’If the structure had been made of steel, there would be no cathedral to speak of today,’ he said. In a fire, ‘iron holds for half an hour, an hour, and then writhes, pulls on the walls and collapses everything.'” – artnet 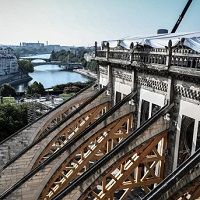