Under the parental oversight of public libraries bill, which has been proposed by Missouri Republican Ben Baker, panels of parents would be elected to evaluate whether books are appropriate for children. Public hearings would then be held by the boards to ask for suggestions of potentially inappropriate books, with public libraries that allow minors access to such titles to have their funding stripped. Librarians who refuse to comply could be fined and imprisoned for up to one year. – The Guardian 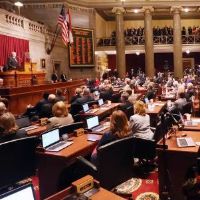