“The plan, the American Federation of Musicians and Employers’ Pension Fund — which covers more than 50,000 people, including Broadway musicians, players in some orchestras, and freelance musicians and recording artists — declared over the summer that it was in ‘critical and declining status’ and would run out of money to pay benefits within 20 years. … Now its trustees are taking the rare step of trying to cut benefits that have already been earned by many of the plan’s participants.” – The New York Times 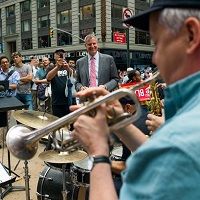