Erik Lee Preminger (his father was film director Otto Preminger) started traveling with his mother while still an infant, got his first jobs with her show before he was old enough to go to school, and was her dresser by the time he was a teenager. Of course he has stories — like the time when Gypsy was driving her first Rolls-Royce through Switzerland in winter and got stuck in the snow: “She tried to dig us out using a bidet she had stolen from a hotel. It was quite an adventure.” – American Theatre 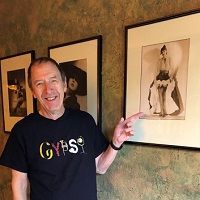