“Before you get mad at me for saying that anything Beethoven wrote has problems, you should know that Beethoven himself was unhappy with the opera. He drastically rewrote it several times over the course of many years, each time tasking a new librettist to fix what the last had written. When the opera originally premiered in 1805 it even had a different name – Leonore, or the Triumph of Conjugal Love. Beethoven ended up writing four Leonore overtures; every time he rewrote the opera he wrote a new one.” – The Guardian 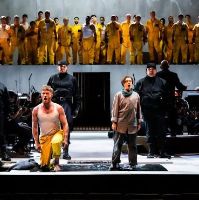