Says the former master builder (i.e., chief preservation officer) of Cologne Cathedral, “The risk of further collapse is quite realistic. The vault is unlikely to collapse as a whole, but more parts could come down. What most people don’t realize is that heat can also damage stone. Intense heat dissolves — simply put — the structure of the stone.” What’s more, the scaffolding that was in use for a restoration project before last April’s catastrophic blaze “was completely welded into place by the intense heat generated by the fire” and the stone walls could be damaged further as that scaffolding is removed. – Deutsche Welle 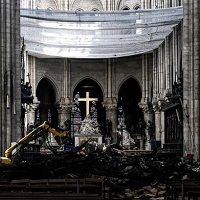