The glasses are aimed at D/deaf audiences and offer personal captioning, flashing the production’s dialogue in front of the wearer’s eyes as the actors say it. They were developed by the NT and introduced in 2018, but will now be used at the London Short Film Festival for screenings of works by emerging directors, including Maxine Peake and Lena Headey. They will be used across four screens at the BFI Southbank. – The Stage 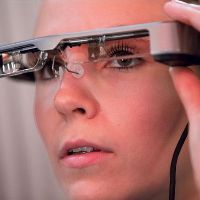