While his father was alive, he drew many of the maps of Middle-earth in the original edition of The Lord of the Rings; after JRR’s death, “his son was left to sift through the files and notebooks, and over the [next] two decades … he published The Silmarillion, Unfinished Tales, Beren And Lúthien and The History of Middle-earth, which fleshed out the complex world of elves and dwarves created by his father.” – The Guardian 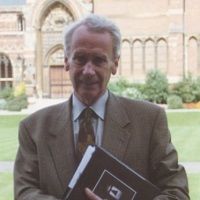