In 2013, construction of the new metro system for Greece’s second city uncovered, in an unusually well-preserved state, the major commercial crossroads of the town during the Byzantine era. Ever since, arguments have raged over whether to remove the ancient structures and return them after construction is complete, relocate them entirely, try to build around and through them and incorporate them into a subway station, or (expensively) re-route the entire metro line. Last month, Greece’s Central Archaeological Council made its decision, though opponents aren’t giving up just yet. – Global Voices 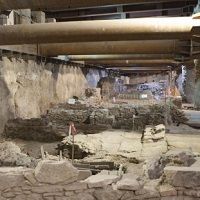