Justin Davidson: The current scheme, a joint Philharmonic–Lincoln Center project, is relatively modest. The auditorium stays where it is but gets gutted and rebuilt (again). In 2022, the orchestra moves out for an extended summer break, from May to November, returns for an abbreviated season in the reconfigured but unfinished hall, and spends most of 2023–24 touring, floating, and sojourning in its ancestral home at Carnegie Hall. The new Geffen reopens in March 2024. (Lincoln Center and the Philharmonic say that they’ve already raised two-thirds of the money.) – New York Magazine 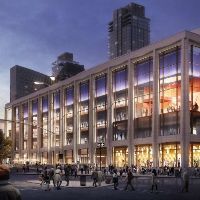