Yes, he looted much of the statuary at the ancient Greek monument (his booty now sits in the British Museum), but he also had Athenian craftsmen take plaster casts of much of what he left in Athens. Now those casts reveal a lot of detail that has since been worn away by the corrosive effects of air pollution. – The Guardian 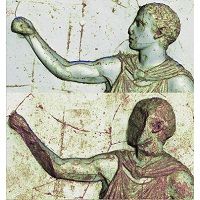