“The Church of St Savior in Chora, which was converted into the Kariye Mosque in the early 16th century by an Ottoman vizier, was designated a museum by the Turkish government in 1945. Its 14th-century frescos and mosaics are regarded among the world’s finest examples of Byzantine art. Turkey’s Council of State … ruled last month that the historic cabinet decision that made Kariye a museum was unlawful because a mosque ‘cannot be used except for its essential function’. … [President] Erdoğan vowed [during Istanbul’s municipal elections] in March to re-consecrate Hagia Sophia as a mosque.” – The Art Newspaper 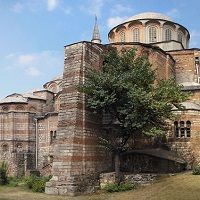