“In the 1980s, during the Iran-Iraq War, Saddam Hussein became obsessed with the Babylonian ruler Nebuchadnezzar, who is notorious for waging bloody wars to seize large swaths of current-day Iran and Israel. Saddam saw himself as a modern reincarnation of Nebuchadnezzar, and to prove it, he spent millions building a massive reconstruction of Babylon. … Today, it seems to fall between picnic site and abandoned theme park.” – Atlas Obscura 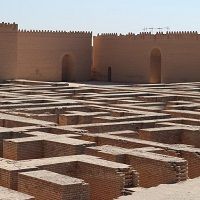