“A civil engineer named Tamim Kasmo, 73, has joined a team of architects and engineers, stonemasons and woodworkers who have taken on the task of rebuilding the [12th-century] mosque. … Kasmo’s team must put the minaret back up and repair the broken columns, scorched ceilings, and bullet-scarred walls of the prayer hall and arcades that surround the courtyard.” – Atlas Obscura 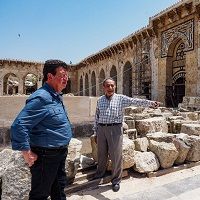