Jesse Green: “On the whole, queer art, which fully emerged from the closet in the 1960s and 1970s — around the same time people in great numbers did — has mostly concerned itself with its own moment, as if to say, ‘Here I am.’ … [Yet] another approach has been emerging in tandem. … The watchcry for these works isn’t so much ‘Here I am’ as ‘There we were.’ More trenchantly, they sometimes ask how the two ideas are, or aren’t, related. What is the queer past for?” – T — The New York Times Style Magazine 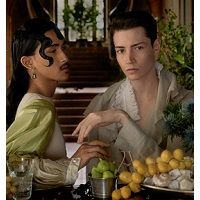