Because of the music, Lauderdale “had become the de facto social director of Portland’s underground political scene, staging rallies, parties and functions at coffeehouses, private homes and auditoriums citywide. In 1994, he called a vocalist he had met at Harvard named China Forbes and the die was cast to improve the quality of political rally music in Portland.” And that is how the now-ubiquitous Pink Martini came to exist. – Monterey County Weekly 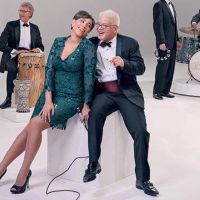