“This year will be remembered as a transitional one for American theater, as a new generation of leaders settled in at some of the nation’s top nonprofits, including Washington’s Woolly Mammoth Theatre (Maria Goyanes taking over from Howard Shalwitz) and Shakespeare Theatre Company (Simon Godwin, succeeding Michael Kahn).” – Washington Post 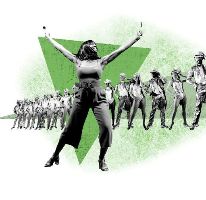