“The play’s producers, Sonia Friedman Productions, declined to comment for this article, noting that the subject of Hermione’s race had been discussed at length when the play opened in London. But that was eight Hermiones ago. When asked to discuss the cultural significance of the casting decision in the era when diversity and inclusion have become priorities in theater, the producers rebuffed The Times‘ attempts to speak with the show’s director, actors or anyone else in the production.” – Los Angeles Times 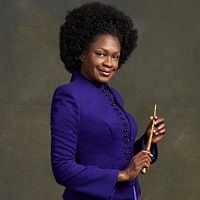