“On Monday, in a small step to preserve this tradition, the House passed the Esther Martinez Native American Languages Programs Reauthorization Act, named after the legendary Tewa linguist. With the Senate vote already in the bank, the measure is headed to President Trump’s desk. Like a variety of other set-term appropriation bills, the legislation, which was first passed under George W. Bush in 2006, has to be renewed by Congress every five years to maintain the funding. And like so many other necessary pieces of legislation, it is still deficient.” – The New Republic 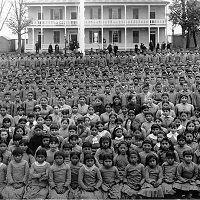