“Reports and photos of two women burning a pile of books outside the Zhenyuan county library in Gansu province emerged at the weekend. According to Chinese media, an article on the county’s website detailed a ‘removal and destruction’ cleanup at the end of October, focusing on illegal, religious, and biased books. … [The reports have] prompted a wave of criticism from commentators and internet users who were reminded of the Qin dynasty, when books were burned and scholars burned alive as a way to control the populace and prevent criticism of the regime.” – The Guardian 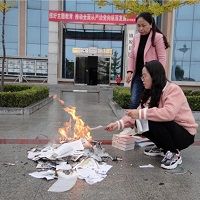