“The location of Portrait of a Lady, one of the world’s most sought-after missing artworks, has been a mystery since it was stolen in 1997. On Tuesday, a gardener clearing up ivy on an exterior wall of the Ricci Oddi modern art gallery, in the northern city of Piacenza, discovered a metal panel which, when opened, revealed a cavity with a painting in a bag.” – The Guardian 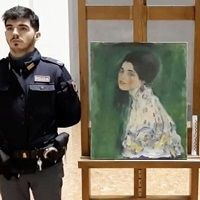