“The Neo-Renaissance structure [in Budapest] has been closed for the past 18 months due to extensive restoration and modernization works. Newly released images reveal the full extent of the project, which has a whopping budget of $30 million. The behind-the-scenes photographs show the vast reconstruction works taking place on the roof, where new tiles have been added, along with a substantial overhaul of the auditorium with a ‘smart’ concept.” – CNN 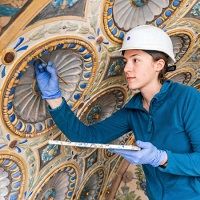