Actors and audiences alike participated in protests against Viktor Orban’s new law around who controls theatre funding. “The change comes as Mr. Orban’s government has become increasingly authoritarian and eroded democratic institutions. It has widened its control over the news media and education, and has given allies roles in overseeing the country’s cultural institutions. And after winning a third term last year, Mr. Orban set the tone for a battle over the arts, saying, ‘We must embed the political system in a cultural era.'” – The New York Times 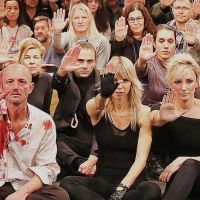