“While [he] was not as famous as underground comics stars like R. Crumb and Art Spiegelman, his artistic influence was nonetheless felt strongly, especially among other gay cartoonists. In the early 1980s he was the first editor of Gay Comix, a series of occasional comic books … He then developed Wendel, an adventurous strip about a man and his lover navigating the early years of the AIDS epidemic.” Cruse won multiple awards for Stuck Rubber Baby, a graphic novel that we might describe today as autofiction. – The New York Times 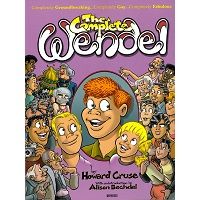