“The band Tinariwen hails from the deserts of Mali in North Africa. Its sound blends ancient Saharan instruments with electric guitars, and has earned the band devoted fans around the world. During a recent U.S. tour,however, band members experienced a darker side of America. Before a North Carolina show, they received a barrage of Islamophobic comments on social media. But as producer Ali Rogin reports, the city of Winston-Salem banded together to give them a warm welcome.” – PBS NewsHour 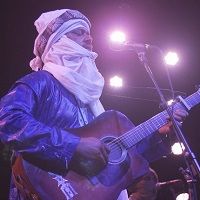