“In the ’60s, estimates suggest that fewer than 2,000 people could speak Hawaiian fluently, and just a few dozen of them were children. But then something remarkable happened. An unlikely Hawaiian renaissance blossomed in the ’60s and into the ’70s, initially driven by artists who sought to reclaim traditional music and dance. … Today, roughly two dozen of Hawaii’s public schools teach exclusively in Hawaiian, about a third of them charters. The number of Hawaiian speakers in the state is now 18,000, roughly half of them fluent.” – The Atlantic 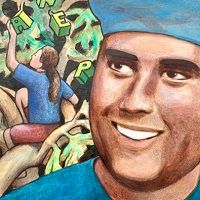