Chipaul and Mille Cao, who grew up as members of wartime Vietnam’s ethnic Chinese minority, met at a dance party just six months before the Communist takeover of the entire country; they fled separately and were apart for years. They ultimately reunited in Southern California, married, and took up competitive ballroom dancing — and now a 20-minute film about them, Walk Run Cha Cha, has made the shortlist for the Best Documentary Short Oscar. – Los Angeles Times 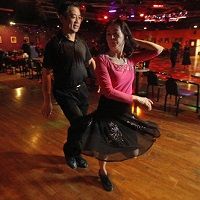