“Ana Subeliani arrived at the film premiere for And Then We Danced by foot, but left in an ambulance, blood running down her face. … Before screenings in November, far-right protesters and members of the Georgian Orthodox Church, some holding religious icons aloft, tried to stop moviegoers entering theaters” screening the film, which depicts a romance between two male members of the country’s national dance troupe. – The New York Times 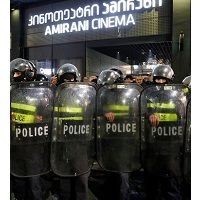