“It took five years of active persuading, plus nearly two decades of water under the proverbial bridge, before choreographer Donald Byrd finally agreed to resurrect The Harlem Nutcracker. Instantly loved after its 1996 New York premiere, his Nutcracker was financially doomed by 2001 — and left some scars on its way out.” But this year, firmly ensconced at Seattle’s Spectrum Dance Theater, Byrd is at last ready to return to it. – The Seattle Times 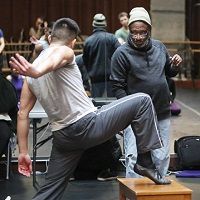