Yes, the water’s up, but the population is also dropping fast. “In the central Castello District, master artisan Paolo Brandolisio — one of only four remaining makers of oars and oar posts for the city’s legendary gondolas — is trying to put his workshop back in order. Brandolisio is trying to salvage his waterlogged oak worktable.” Brandolisio says, “If no one’s left to make wooden boats, they’ll disappear and be replaced by plastic ones.” – NPR 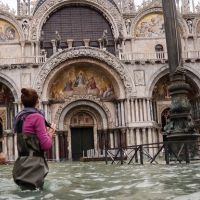