He was born and raised in Soviet-occupied Latvia and trained in what was then Leningrad; he became well-known in the West as music director of the Oslo Philharmonic and then the Pittsburgh Symphony. “In the first decades of this century he was frequently awarded the accolade of greatest living conductor. His tours in those years … with his two primary orchestras, the Bavarian Radio Symphony and the [Royal] Concertgebouw [Orchestra] of Amsterdam, were eagerly awaited events and rarely did they disappoint.” – The Guardian 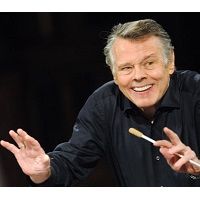