“This stirring performance, titled ‘Un violador en tu camino‘ (“A Rapist in Your Path), was first brought to life by the feminist art collective called Lastesis at a protest in the port city of Valparaíso, Chile, late last month, as a way of drawing attention to violence against women. Since then, this viral action has materialized in Colombia, Mexico, France, India, the U.S. and Turkey (where an attempt to stage it on Sunday was broken up by police).” – Los Angeles Times 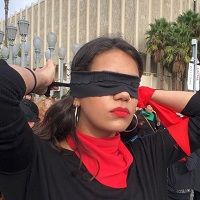