Until now, the honor had been thought to belong to Florence Lawrence (“the Biograph Girl”), who became famous under her own name following an outrageous publicity stunt by her new studio in 1910. But new research has found that a French slapstick comedian called Max Linder was marketed as “Max” by 1907 and under his full name by 1909. He became famous in both Europe and Hollywood, and Charlie Chaplin considered him a major influence — yet he was forgotten after his bloody death in 1925. – The Guardian 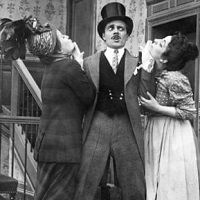