“The police are still looking for the missing john — an artwork called America by Maurizio Cattelan — but, so far, they remain empty-handed. … Six people had been arrested in connection with the theft, only to be released later without charge.” Local residents have any number of ideas about what’s happened to America, and the common thread to all of them is that no one takes the incident seriously. – The New York Times 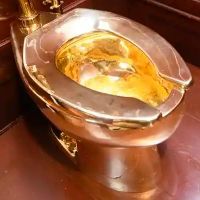