For the second time in five years, voters in North Carolina’s largest city and surrounding Mecklenburg County defeated a proposal to raise the sales tax locally by a one-fourth of a percentage point, to a total of 7.5%. The additional tax had been expected to raise roughly $50 million annually, to be shared between the city’s arts (45%), parks (34%), and education (16%), with 5% for arts and parks in the county’s other towns. – Qcitymetro (Charlotte) 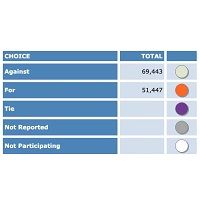